Meet Sabrina: fabulous New Yorker, beautiful soul, happiest girl in the room. And now a runner. Oh, and also my cousin. Read about her very first race experience, which just happened to be in Central Park on New Year’s Eve. Doesn’t get more fabulous than that. – xo

I would like to start this off by saying that I am NOT a runner. I’d never run a full mile before training for the event I am going to speak about. I am not in fabulous shape, and I hate the idea of sweat and pain. Especially when combined with near freezing temperatures.

Nonetheless, here’s my story of how I ran my first race, which was a four miler on New Year’s Eve at midnight in NYC at Central Park and also how I found my footing so to speak. 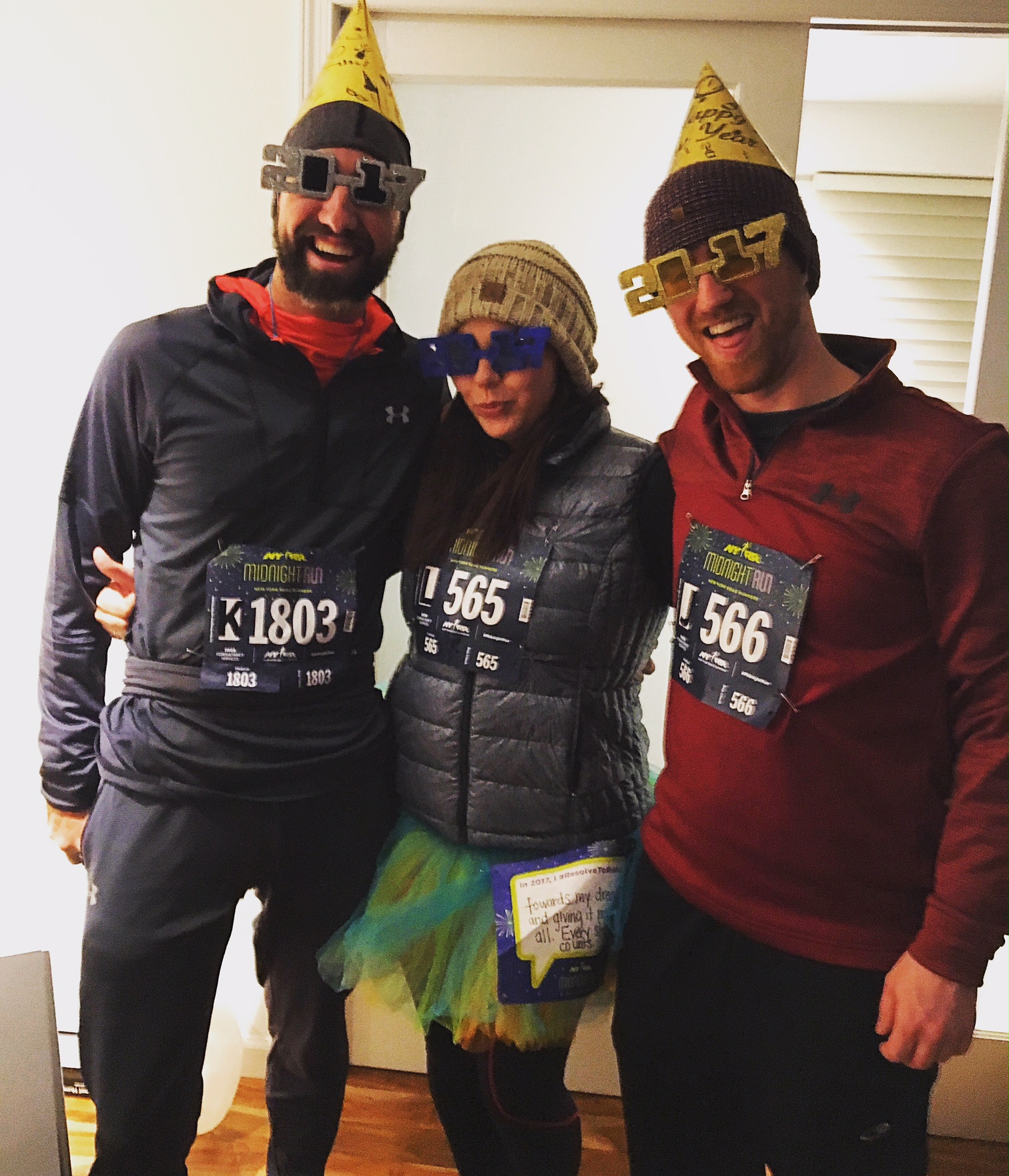 I suppose the idea of running a race has been in my head for a very long time, but nothing ever triggered a real thirst for it. That is, until last year. The first moments of 2016 (literally New Year’s Eve) were celebrated with my boyfriend, my childhood friend, and his fiancée in New York City. It was my first NYE being back home and I wanted it to be excellent. We planned to go to a comedy show and then to see fireworks at midnight. I was super excited when I found out that we’d be watching the fireworks in Central Park.

Let me stop there and say that Central Park has always been one of my favorite places in the United States. From the Imagine circle (Strawberry Fields) to the old stables to the Central Park Zoo and the lush Great Lawn – I’ve always found it to be an expansive stretch of greenery and urban beauty. I was beyond-the-moon ecstatic that I would be ringing in the New Year with a man I love so much and some great friends in a place I’ve loved since I was a kid.

What my friend didn’t tell me was the reason for the fireworks. It turns out that every New Years Eve at midnight, Central Park hosts a four mile run around the park. People from all over the world join in for a huge pre-party/dance party and then a firework send-off as they start the year off on the right foot, literally. As we watched the fireworks and then saw all the runners, I was amazed. I wanted to cheer them on and I did – and I also wanted to be a part of their fun. Thus, the idea of running a race came to life. 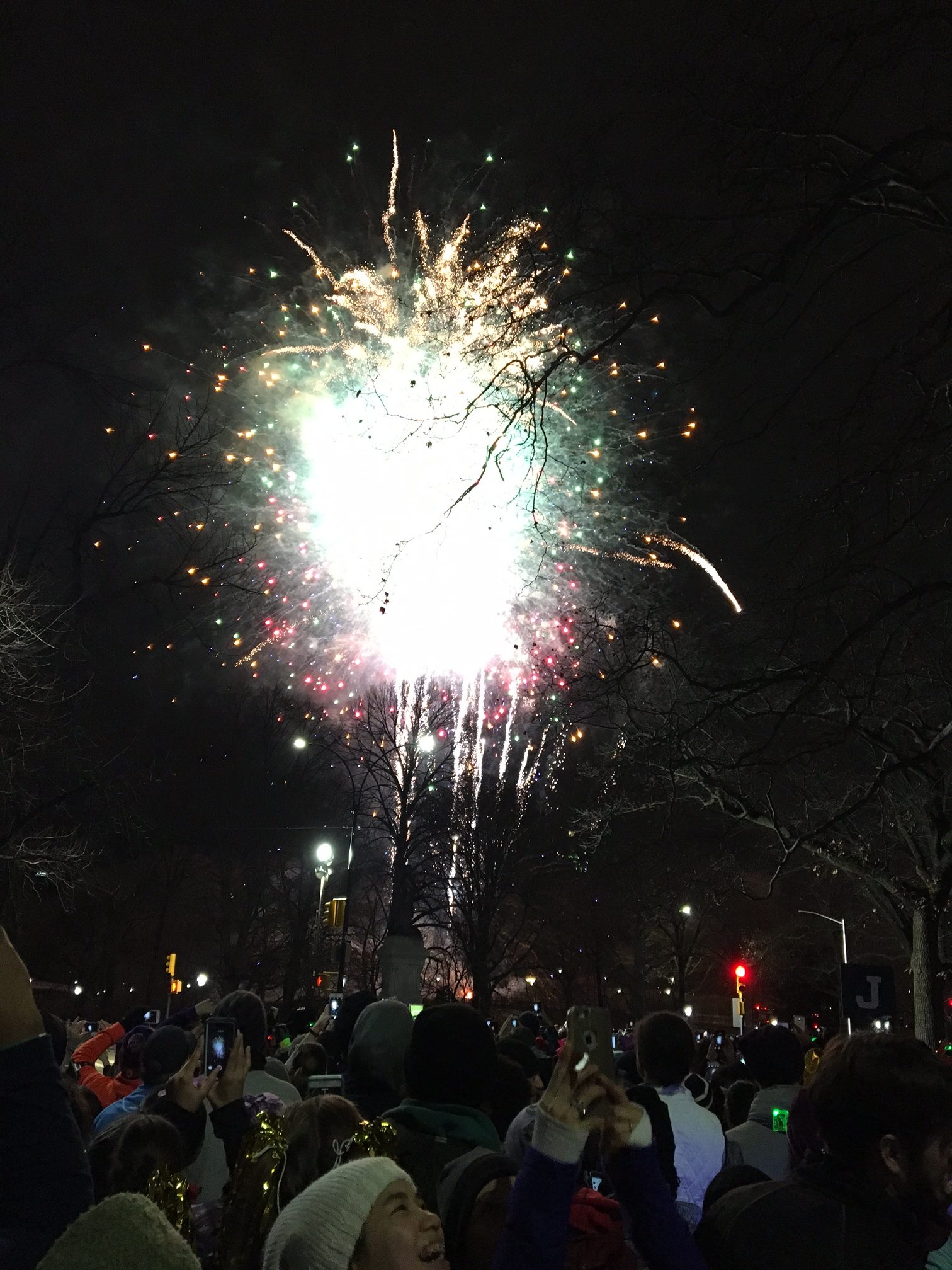 When I first asked my boyfriend to train for the New Years Eve midnight run with me, I was a bit scared he would think I was crazy. It was freezing out there! Plus he knows how much I love getting glammed up for the New Year. Instead, I was met with eager anticipation and excitement. We didn’t say a definite yes to doing it, but we both kept it in mind as something we’d like to do at some point.

As September approached, my boyfriend’s sister was training for the Savannah Rock’n’Roll Marathon. Her love for running was obvious, and I was entranced. That’s when I asked my boyfriend if we could start training for the upcoming midnight run. Again, I was met with excitement.

We began training in small increments. We started with about a mile a day on weekends to adjust to the colder temperatures as the seasons changed and also to get our bodies used to running. (I also had a 6 mm kidney stone that formed at the end of November that was lodged in my left kidney, so that made training a bit more difficult at first.)

I had never run a full mile before this training, and I have to admit it was brutal. The hardest thing for me was learning how to breathe properly. Whenever I would get to lap 2½ (4 laps = one mile on the high school track near our house), I felt completely winded and weak. I knew that I was perfectly hydrated and rested and that this was just my body’s reaction to something it wasn’t used to doing. Thankfully, my boyfriend was right beside me the entire way. He encouraged me to keep running but also suggested that we could walk if necessary. Although I desperately wanted to jump on the idea of walking, I knew I needed to keep running for myself.

So with every ragged breath, I thought about everything I was doing to help myself and my life. My immediate family has a history of health problems which are mostly due to lifestyle choices, and this motivated me when I felt like quitting. I also considered the fact that my parents never stressed the importance of being physically active to me and my siblings. I want to break this cycle by being physically activity and by pushing my limits in healthy ways so that I can teach this to my own children someday. The idea of looking and feeling better didn’t hurt either. 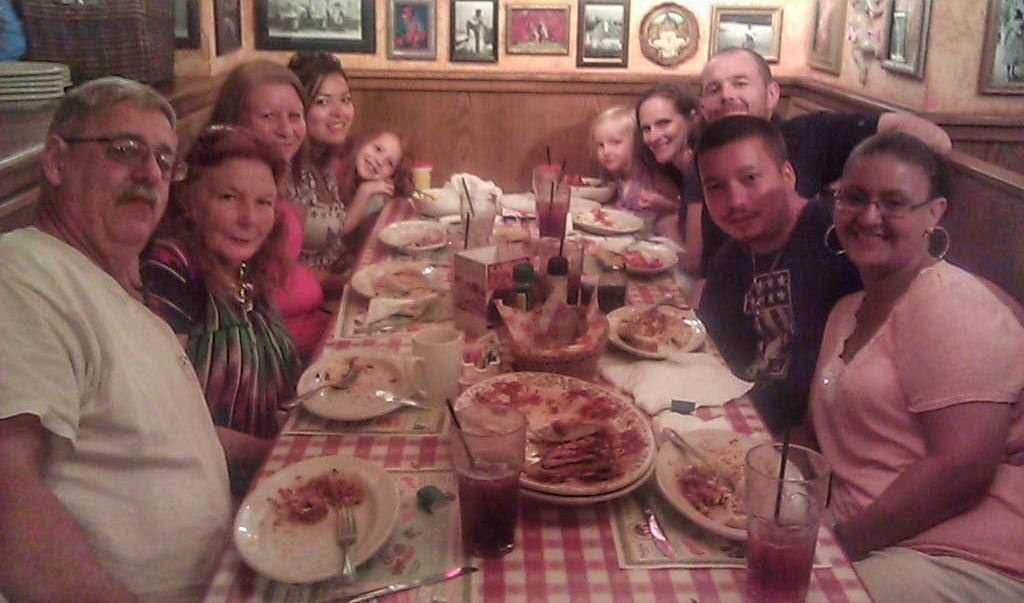 We kept this up, and although running a mile or two never got much easier, my time got a bit better and I didn’t feel like stopping until mile two.  Small accomplishments, but they made a big difference. My body would cramp up around a mile and a half, but I was able to push through the cramps by thinking about how much was left to go and how amazing I was doing. After another half a mile, the cramps would subside to a small amount of annoying mental background noise. I could do this. I was doing it.

The eve of the run came and I began to get a bit nervous. I had trained consistently in mile increments during weekends but there were two things I was unfamiliar with: the cold and the food. I didn’t know whether it would be super cold and I would freeze to death, or if I would sweat to death by layering up so much. I purchased running leggings that were perfect for trapping heat in, but I was concerned about my hands and my head.

I also discovered during an early December run that my lips chap badly in the cold. I know that sounds like a natural discovery one would make, but I found it out when I was running and started to taste copper. My boyfriend gasped and asked what I’d done to start bleeding. Apparently my lips were still used to Florida temperatures and could not handle the brute force of chilly winds from the Northeast. I realized in subsequent runs that my lips would bleed naturally because of the wind if I didn’t keep them very moist and protected.

The second thing I was concerned with was what to eat and drink before the race. I knew I needed to hydrate because of my kidney situation and also because of the effect of running itself on my body, but I was so worried about eating too much or too little. I decided on a small chicken cutlet wrap in the afternoon and planned to fill my belly post race.

I met up with some friends and celebrated the New Year a bit,; then one of my friends, my boyfriend, and I separated from the big group to go to the park for the race. The weather was cold but doable. It was about 32 degrees and I was layered with my running leggings, heat trapping socks, a fashionable tutu, a long sleeve breathable shirt, a Dri-Fit jacket, and a lightweight heat trapping vest. I had a beanie to cover my head and running gloves that I’d found for a super affordable price on Amazon. I was ready. At least I looked ready. 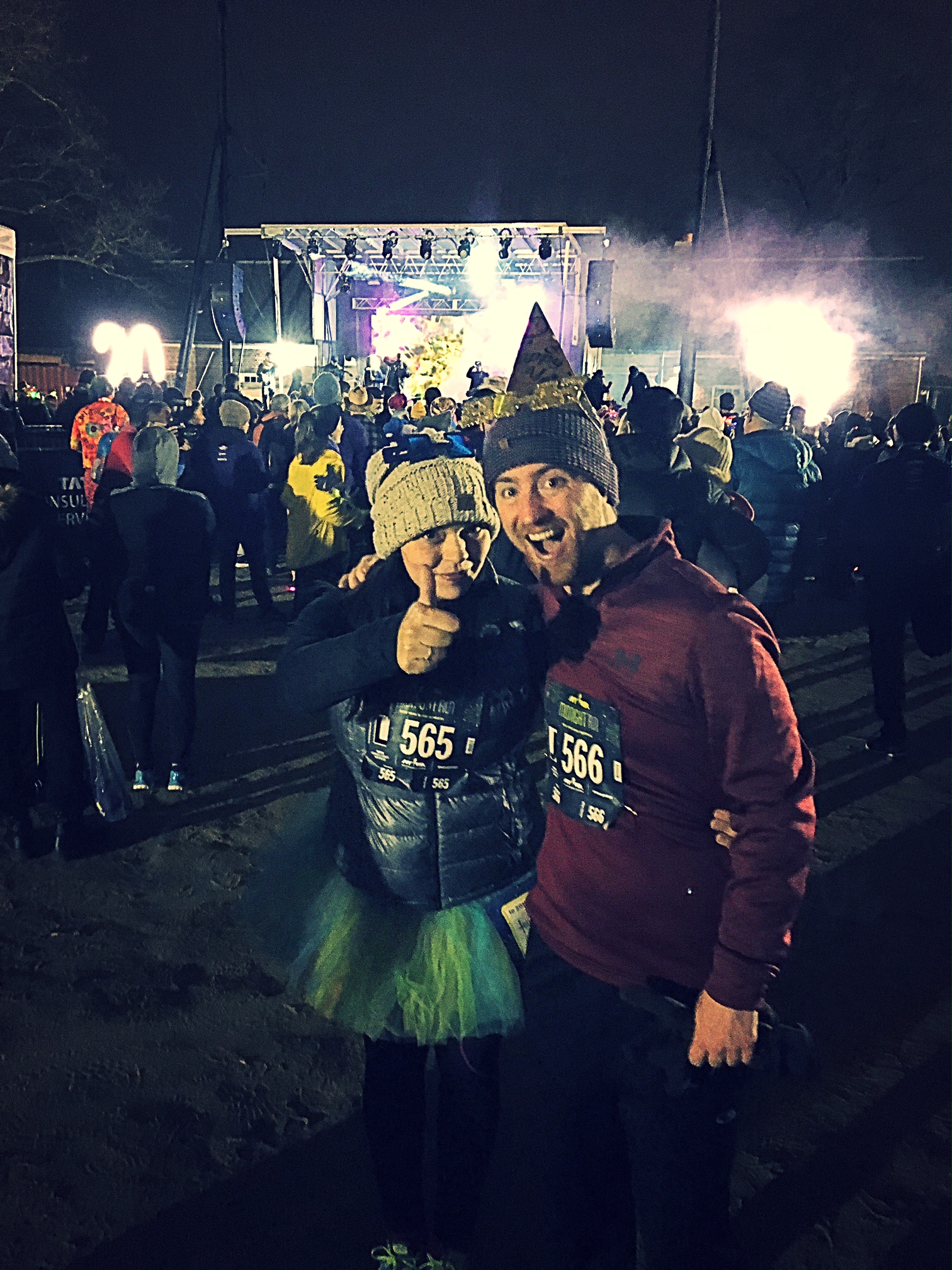 I was a huge ball of nerves as we arrived for the pre-race festivities. Bands played, disco lights flashed, and the entire traverse of Central Park was decked out with New Year’s Eve swag and lights – welcoming all runners from everywhere to participate. I saw older faces and younger faces in every shade, and one thing was consistent: the overwhelming energy. Laughter and singing came from everywhere. People were literally bouncing around in glee. I knew I would be okay. These were my people. We were in this together.

The clock drew close to twenty minutes. We were told to use the bathroom and head towards the corrals. The corrals were sectioned off by bib number, and your bib number coordinated with your projected speed. I projected 12 minutes and was closer to the end of the corrals. My boyfriend and friend were closer to the front, but they decided to start with me toward the back of the pack.

Before we knew it, the countdown had begun to the New Year and the fireworks were getting ready to start. I was literally shaking at this point and had to remember why I chose to run. Luckily, I had written it on my bib as my New Years resolution: to make myself better every day. This was etched on my bib and my heart, and as the corral gates opened, my feet did their job. I was surrounded by runners of every age, each running for their own special reason.

Near mile 2 we stopped to drink sparking apple cider. I pushed on through the night with my boyfriend beside me. Every time I felt like slowing down, it was as if some greater force was there and told me to continue. From the bystanders cheering us on, to my boyfriend encouraging me, I was in it to do the best I could. We finished in under an hour, which was my goal and pretty great for me, but definitely left room to grow. (Actual time was 50:34 with a pace of 12:39.) It started to rain shortly after, so it was a nice finish as I don’t know how much more I would have run once it began pouring.

The high I felt the day after the race was amazing. Knowing that I did something I never thought I could do was great for my confidence. Also, doing it with a kidney stone lodged in me was a feat in itself. But achieving my goal was just the beginning. My ultimate goal for 2017 is to run a 10k, and in 2018 I plan to run a half marathon. My biggest takeaway from this experience was the decision to take control of my life and my body. I’ve proven that my family’s health history does not define me. Their limits and “can’ts” do not affect my goals and “cans.” 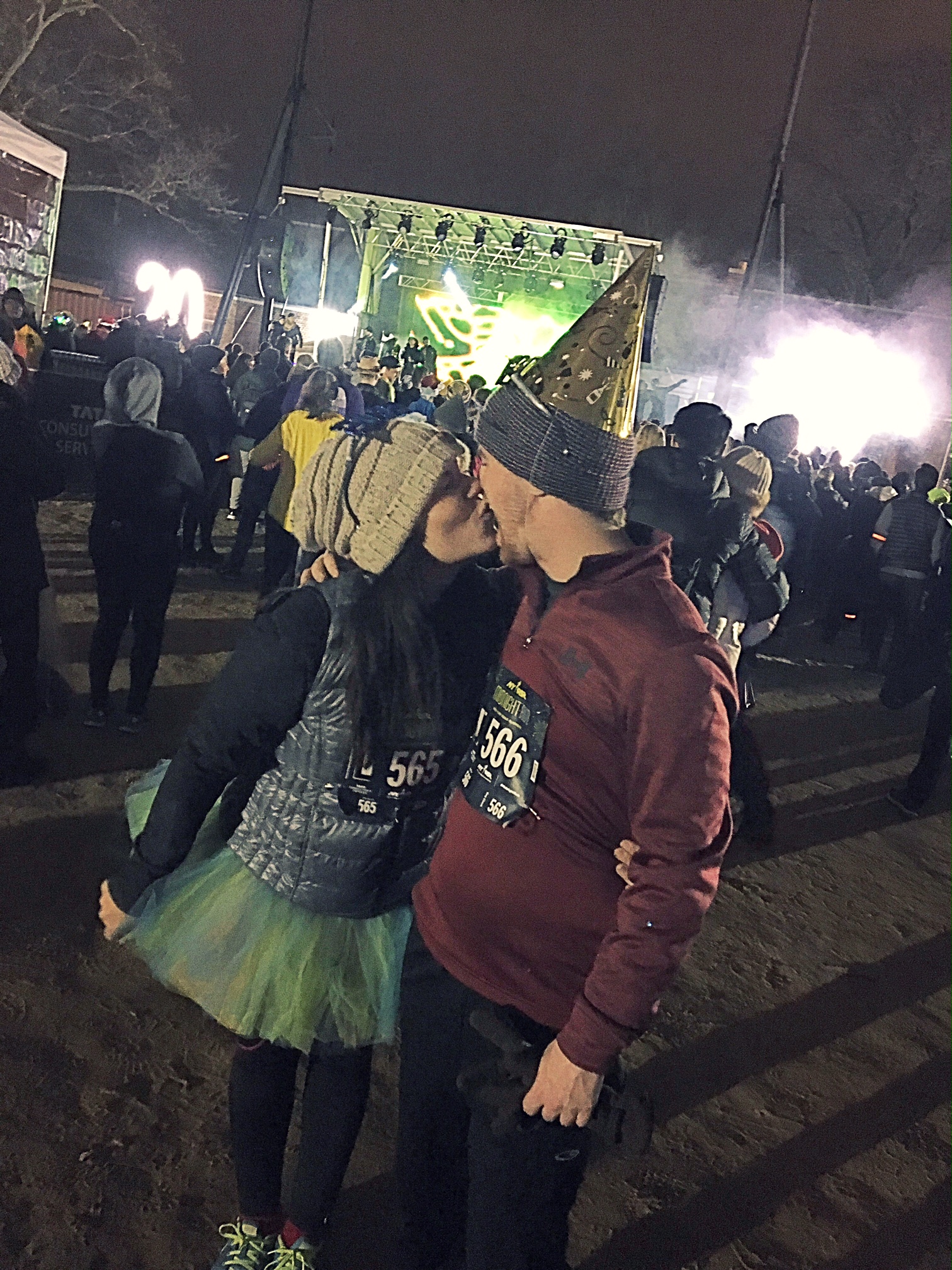