When we arrived in Japan in November 2020, we were immediately whisked away to quarantine. As soon as we completed our COVID tests and collected our luggage at the airport, a driver took us straight to our home on Camp Zama. We unloaded our things, and then we literally did not set foot outdoors for 14 days.

As you can imagine, when those two weeks were up, we were more than ready to get outside and start exploring. 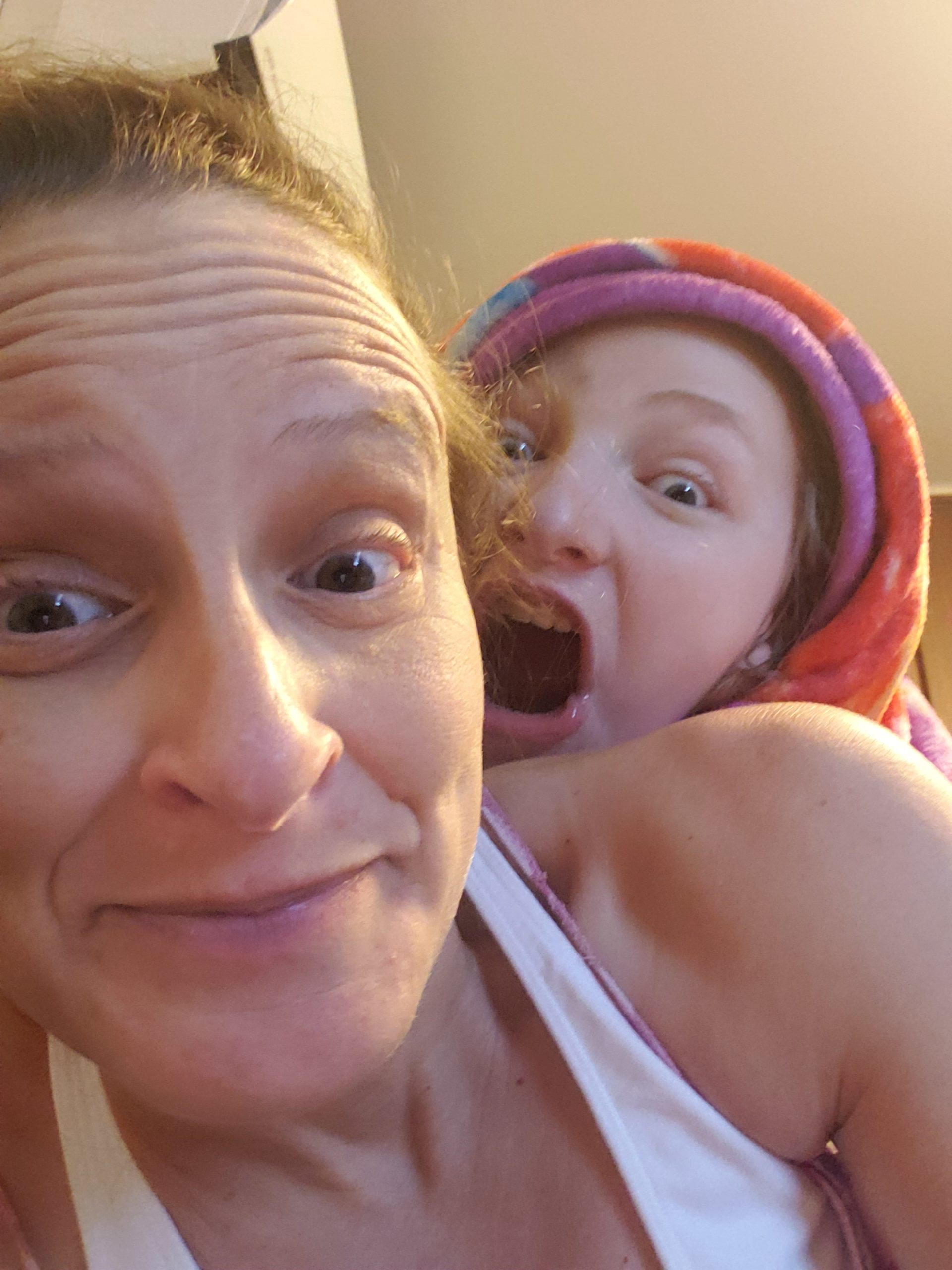 Luckily, the COVID-related restrictions had eased up at the time, and we were permitted to do quite a bit more than we are right now, like dining out and using public transportation. (Little did we know at the time that we would have exactly 10 days of freedom before heightened restrictions were put back in place.) We spent a few days attending to official business and getting acquainted with our new community. And then we were ready to explore. We didn’t have a car yet, but we had bus passes, and that was all we needed.

Our friend suggested Gotokuji Temple as an easy first adventure. Nicknamed the “Lucky Cat Temple,” this Buddhist temple is said to be the birthplace of , or “beckoning cat,” which you’ll probably recognize: 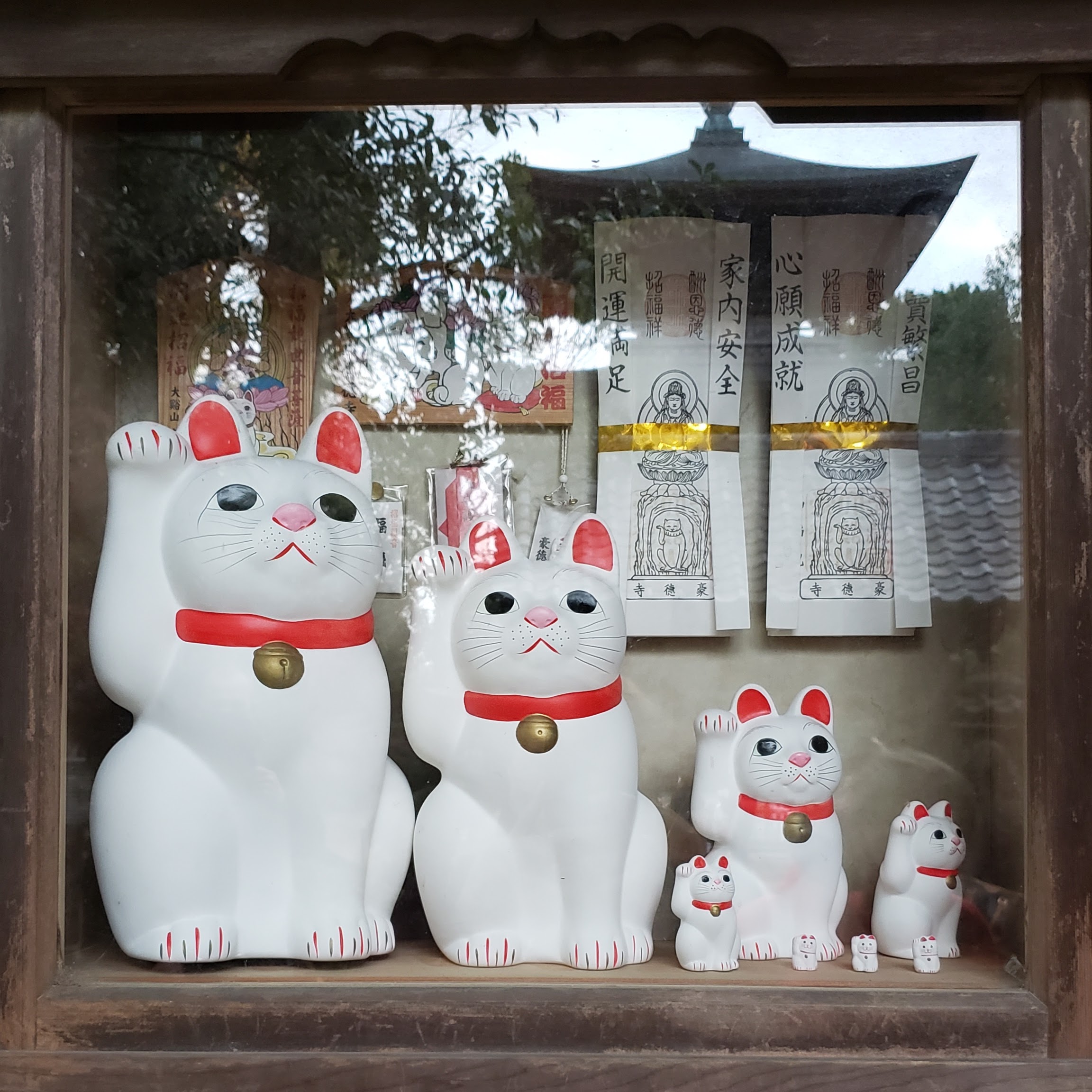 According to legend, in the 17th century, the temple was home to an aging monk and his beloved cat. Times were hard, and the monk asked his cat to bring them good fortune. One day, the cat beckoned to a group of samurai and invited them into the temple, subsequently saving the warriors from a thunderstorm. One of the samurai turned out to be a wealthy and powerful feudal lord. To show his gratitude, the lord donated rice fields and land, and he dedicated the temple to his clan. When the lucky cat passed, the monk blessed his grave, and the beckoning cat statue became a symbol for good fortune, prosperity, and fulfillment of wishes.

Fun fact: the significance of the beckoning cat, or the maneki neko, depends on which paw is raised. The cats at Gotokuji Temple beckon with their right paw, which invites good fortune and money. Cats with their left paw raised invite customers and are most commonly used in businesses.

It’s pretty easy to get to Gotokuji Temple by train. From Camp Zama, we took the Odakyu Line toward Shinjuku, then rode directly to Gotokuji station (no transfers required). It took an hour to get there by train, then about a 15 minute walk to reach the temple. Once you arrive at the station, head south – follow the signs to the temple. You’ll walk through a quiet, residential area, past little shops and restaurants. Like most Wilhelm Family Adventures, this one started with us getting lost. While walking down the main road, we spotted a religious site on the corner and assumed this was our destination. It was lovely, and we were very excited to explore…but where were the cats? Turns out we were at a Shinto shrine, not a Buddhist temple, which is honestly a pretty easy mistake for Westerners to make. 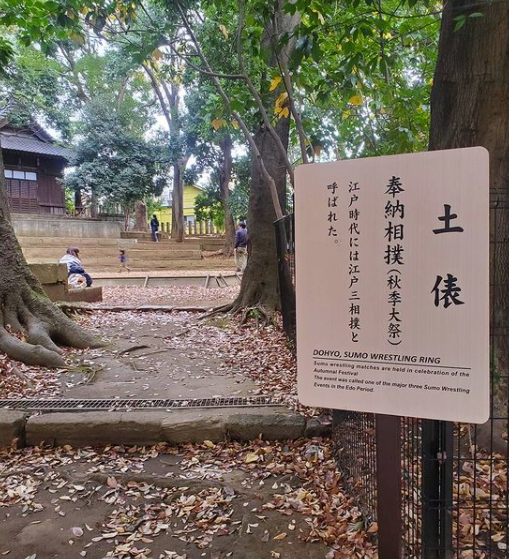 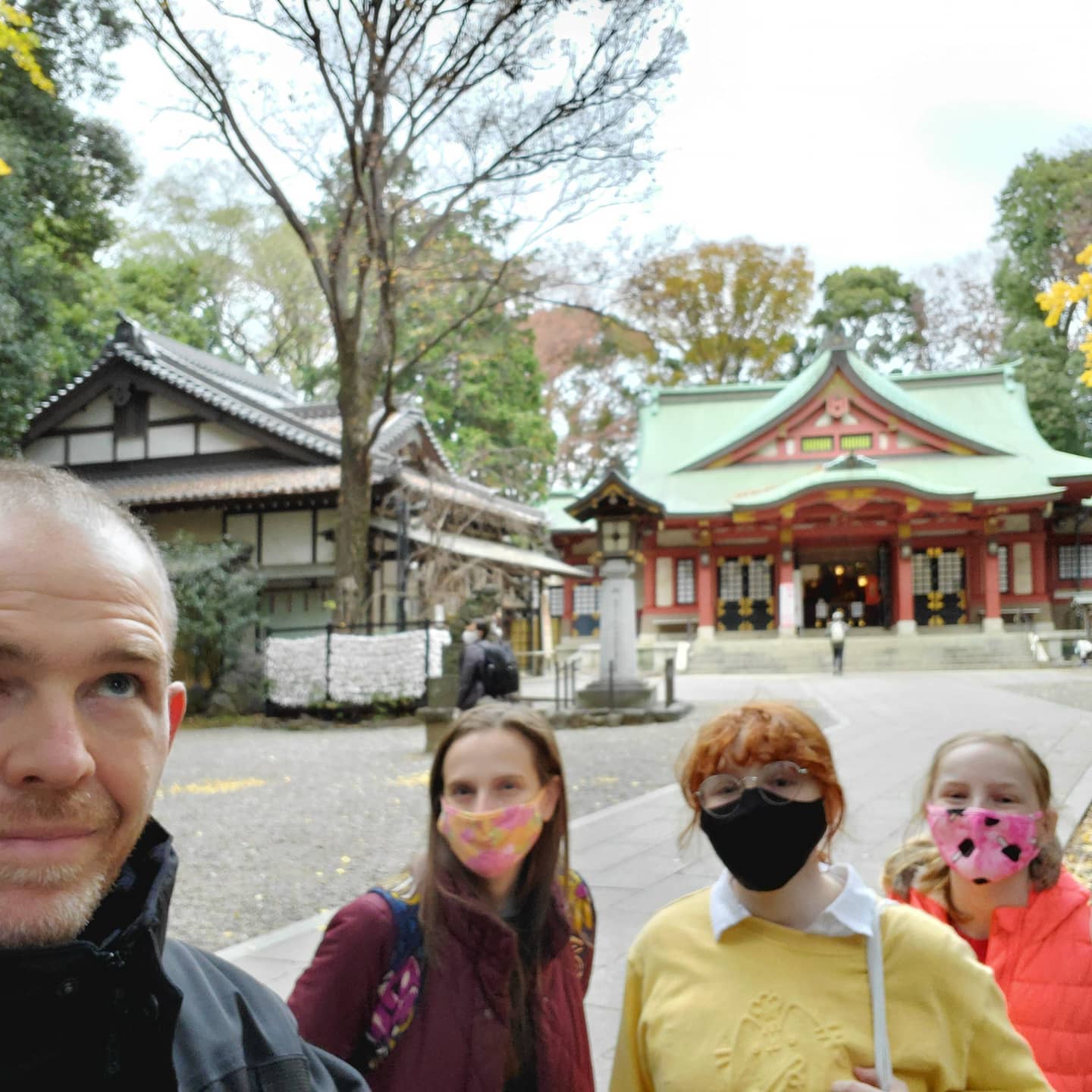 We used Google Maps to point ourselves in the right direction, and we continued our walk to Gotokuji Temple.

Despite our accidental detour, we managed to find the temple pretty easily – we just followed the crowd until we spotted the cats. The entrance to Gotokuji Temple is lined with maple trees, and we were lucky enough to see some autumn foliage (we’re from Florida, so this is a big deal!). As you walk into the temple grounds, you’ll see a three-story wooden pagoda and a huge stone table. A bit further along, you’ll spot a bell tower and a large incense burner shaped like a lion. And just past that, sort of tucked away in front of the pagoda, you’ll see a small temple…and that’s where you’ll find the cats! There are thousands and thousands of cats of all sizes…from over a foot tall, to the size of my thumbnail. It’s really something to see. (I was so nervous that we’d knock over a pile of cats, but I guess luck – ha – was on our side.) And new cats join the crowd every day because many visitors purchase a maneki neko at the gift shop to place at the temple as an offering. This is to bring good fortune or even to make wishes come true! The lucky cats start at ¥300 and are available in a wide range of prices. 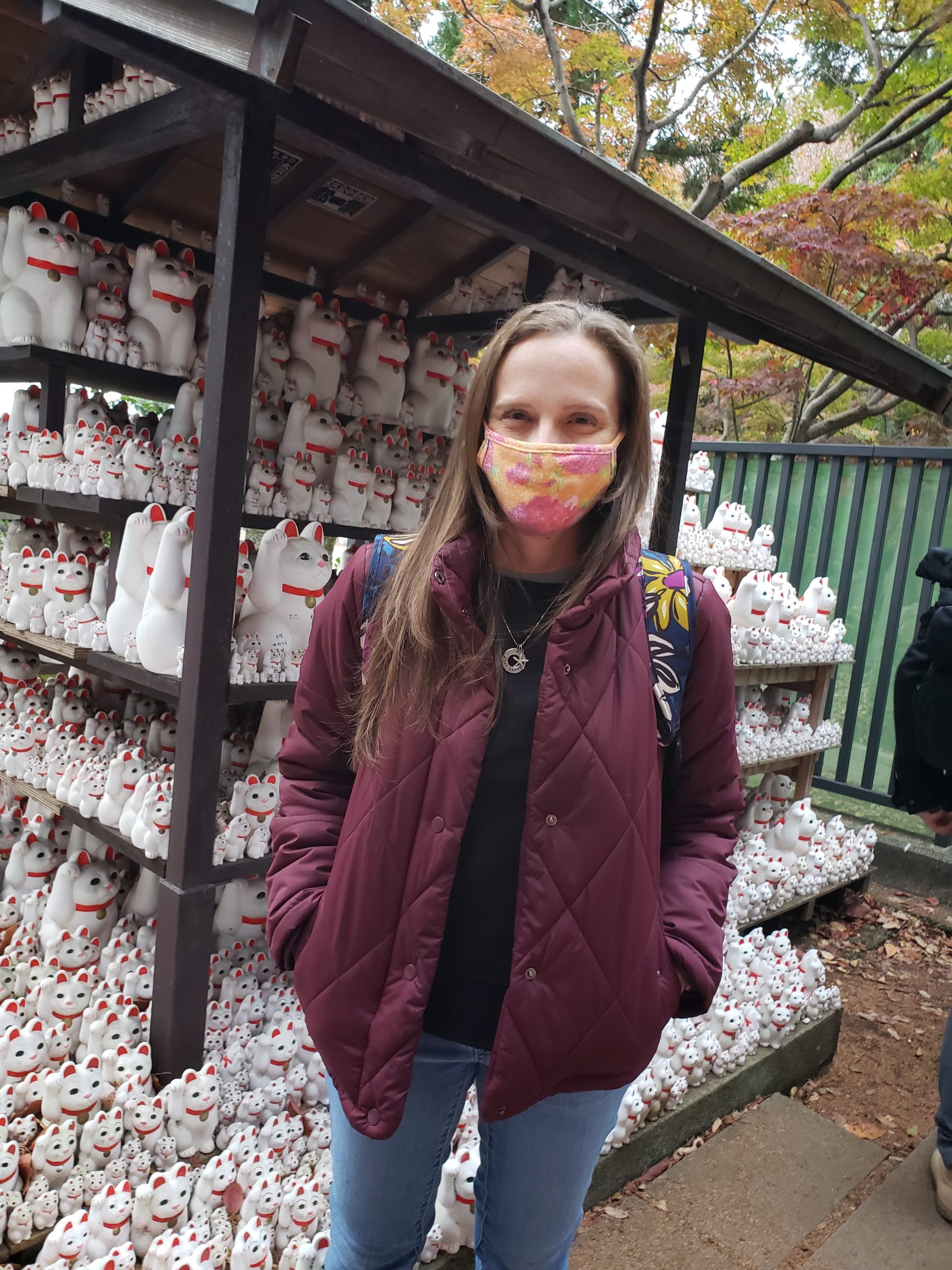 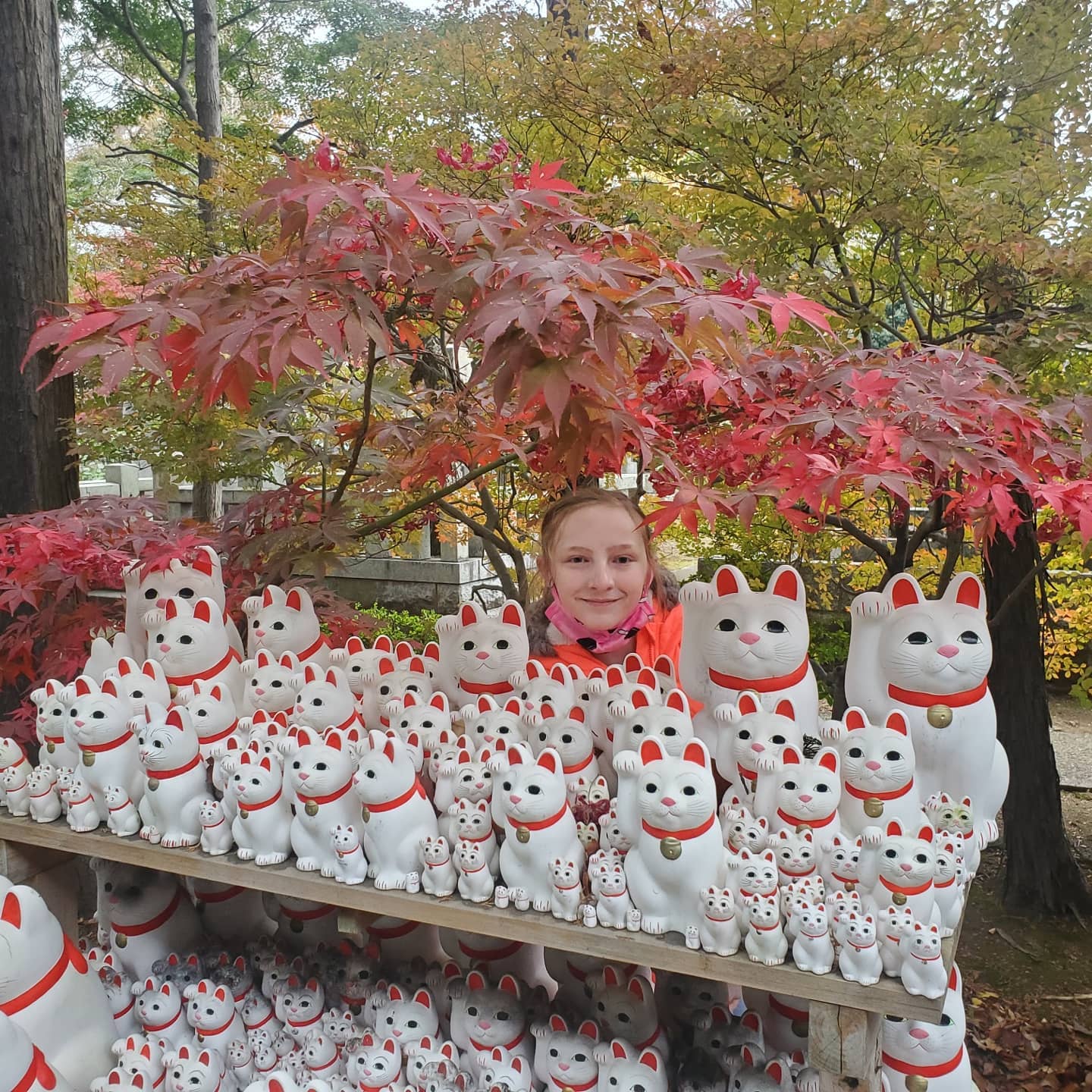 Speaking of fortune…for ¥100 you can purchase a fortune at the gift shop. 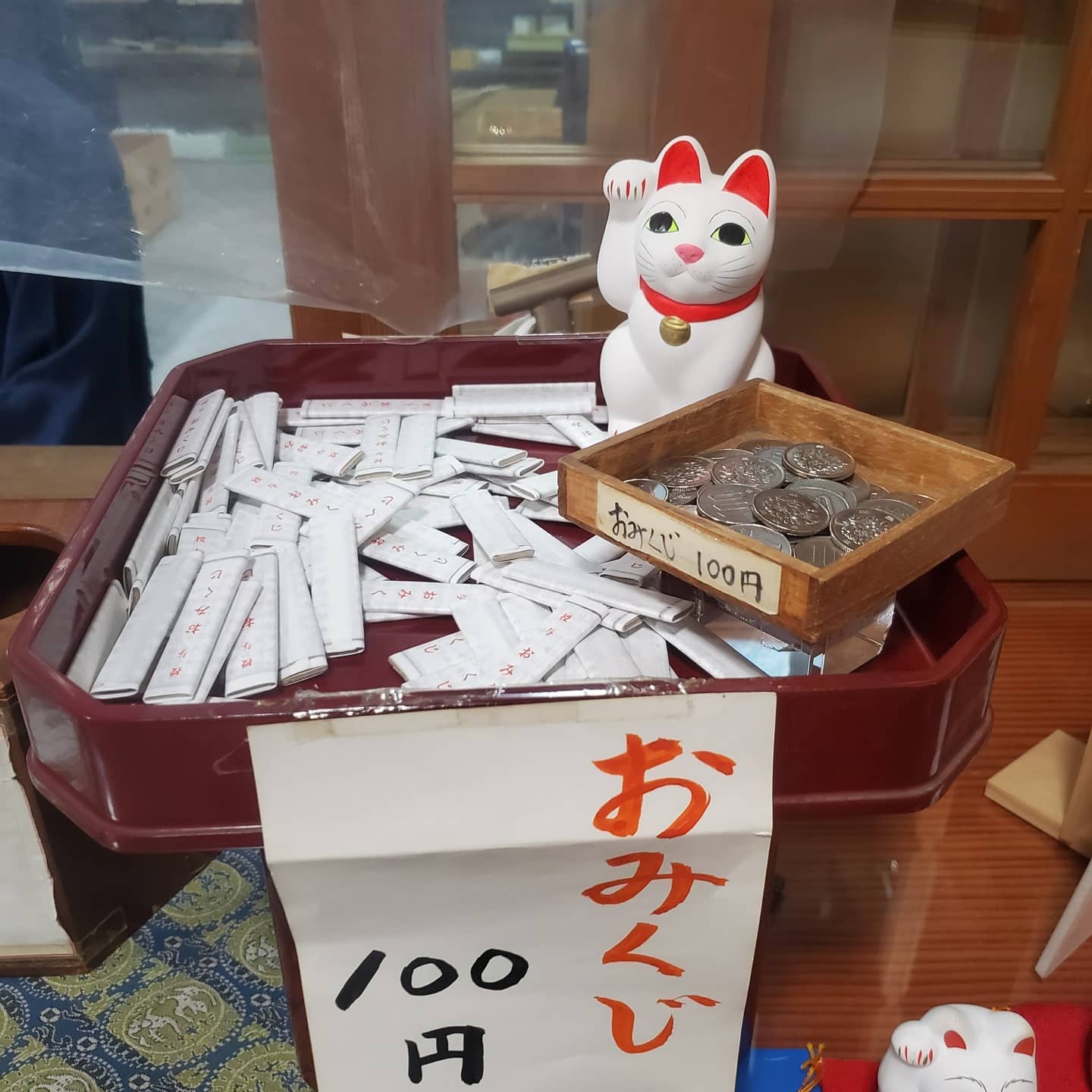 Some are good and some are bad. If you get a good one, you can bring it home as a souvenir…and if you get a bad one, tie it to a tree in the temple and leave your bad fortune behind! 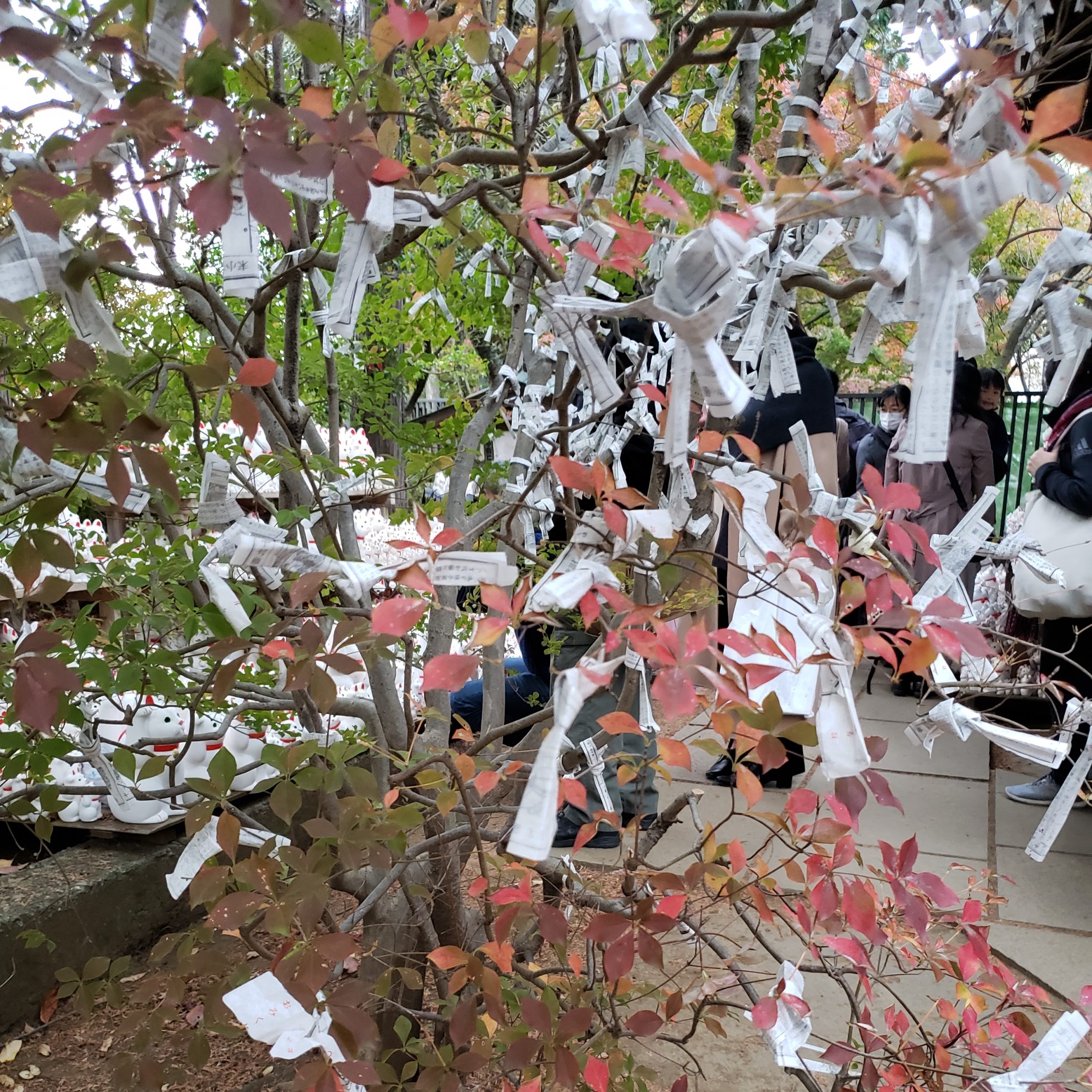 We each bought a fortune, but to be honest we have no idea if they were good or bad. Some blogs suggested asking the temple staff to help us interpret our fortunes, but the gift shop was a little crowded and none of us felt brave enough to attempt it. We brought them home, so hopefully they were good!

You’ll also find a small, ancient cemetery at the back of the temple grounds. It is holds remains of the Li clan, the family to whom the temple was dedicated in the 17th century, and is a nationally designated historic site. We’ve heard that Japanese cemeteries can aren’t easy for tourists to visit and are often locked, so you should take the opportunity to look around. Know Before You Go:

When to visit: The cats are most abundant in January & February, following the New Year holiday offerings. 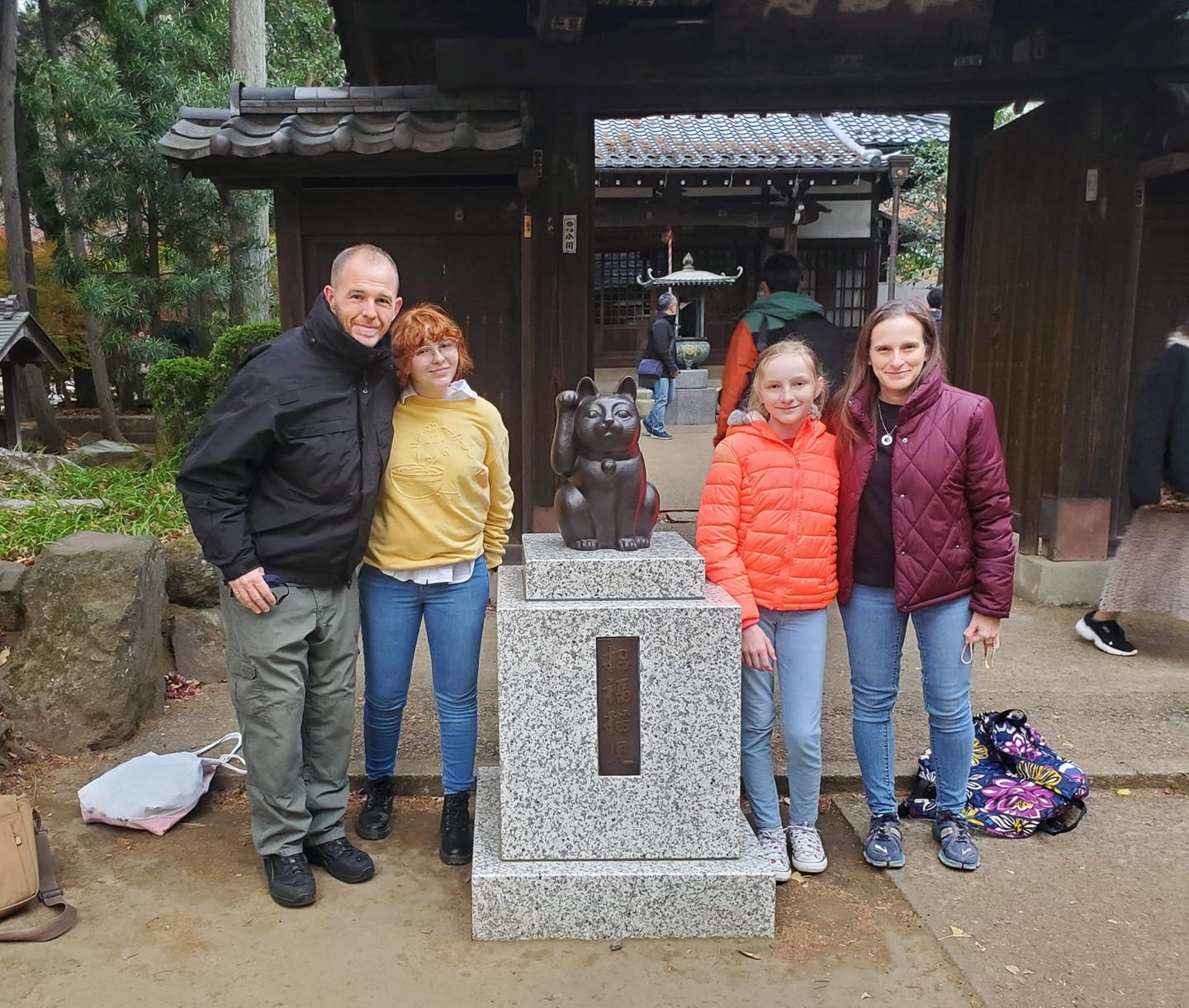 Five Years After My Spinal Fusion: An Update
Day Trip to Mount Oyama