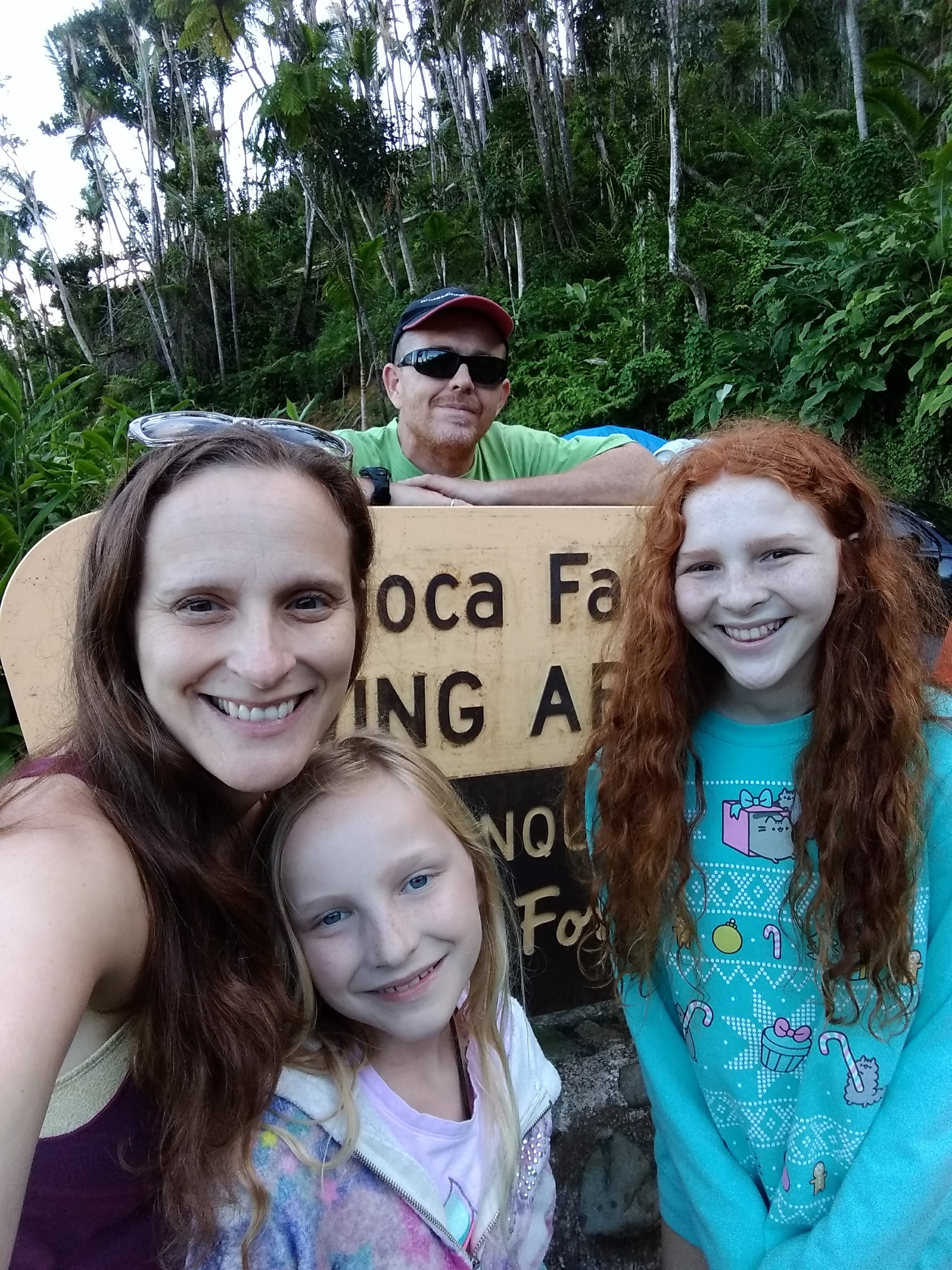 Last month, we fulfilled a long-time family goal of taking a Puerto Rico vacation. As I’ve mentioned in other posts, Vic has traveled to Puerto Rico for work for years and has always dreamed of visiting with the whole family. But after the 2017 hurricane season, it looked like that dream wouldn’t happen – or at least that it would be postponed indefinitely.

Vic’s last trip to Puerto Rico was just (literally hours) before Hurricane Irma, so he hadn’t seen it in its post-hurricane state. We really weren’t sure what to expect. But his co-workers, who have been back in recent months, assured us that Puerto Rico was up & running and very much in business for tourists. So we went for it.

Inevitably, the first thing everyone asks when we mention our trip to Puerto Rico is, “How did it look?”

What they mean, of course, is: “was there widespread devastation?” “did you have electricity?” “were businesses open?” “is there even a Puerto Rico left to visit?”

There is a lot of inaccurate info out there about Puerto Rico, so let me address that question first. I can’t speak about the entire island, but I can tell you about what we saw: San Juan (north shore), Fajardo (east coast), and Ponce (southern coast). And in all 3 areas, from what we could tell it seemed to be pretty much business as usual. Hotels and restaurants were open. Tourist attractions were up & running. Everywhere we went had power and water. We didn’t see destroyed homes or downed trees or any major signs of the massive storms that tore down much of the island less than a year before. 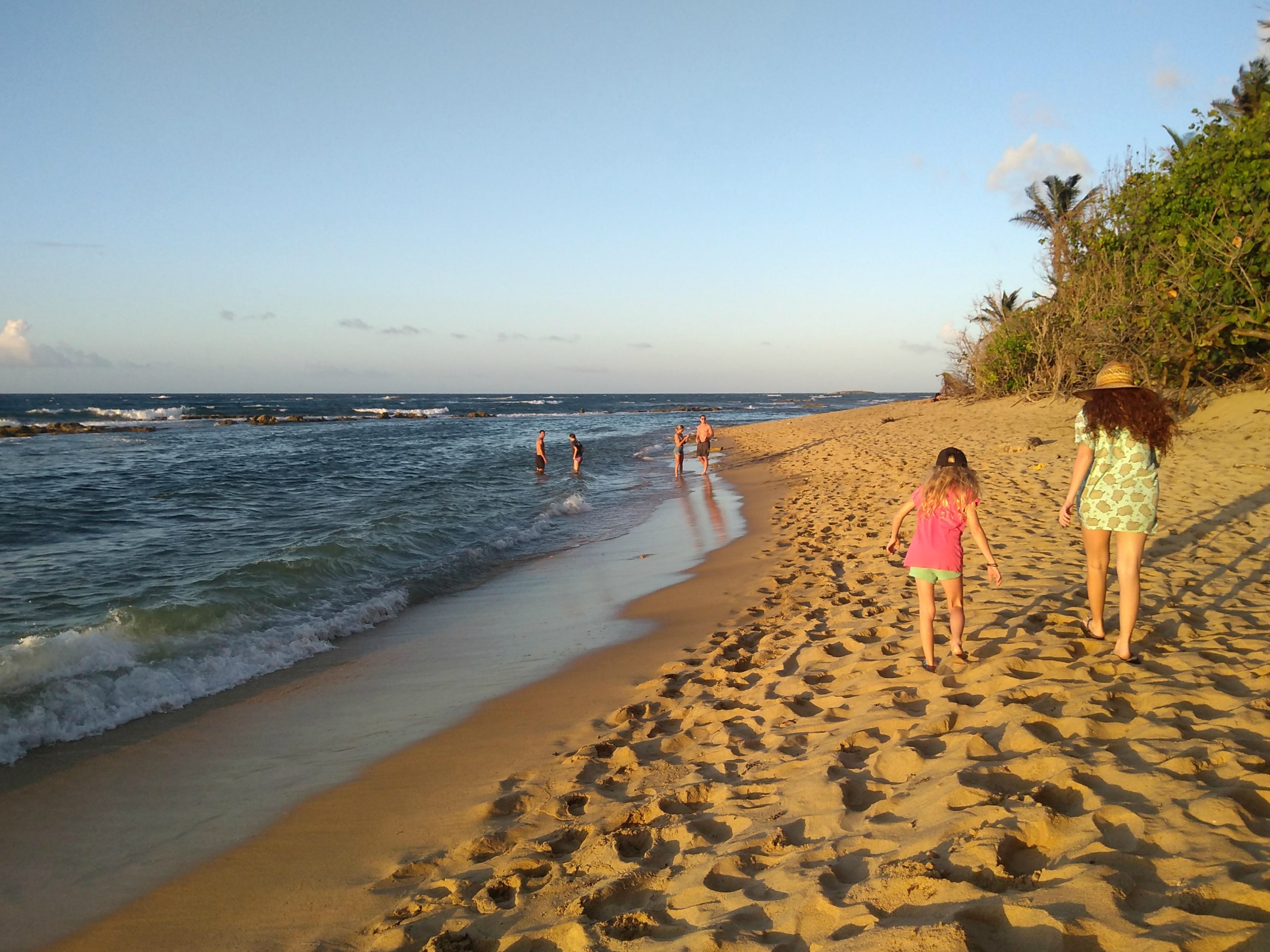 In other words, congratulations, Puerto Rico! You have done a phenomenal job in your recovery efforts.

Now, things weren’t perfect. As we flew into San Juan, we could see a number of homes with blue tarps for roofs. Some areas were still under construction, and Vic noticed that some of the restaurants he’d eaten at on prior trips were shut down or just gone. And for some reason, a lot of the traffic lights in San Juan weren’t working, but I have no idea why.

Also, it’s important to note that we stuck to larger cities with lots of tourists. We spoke to a number of locals, who all said that the more rural towns, especially those in the mountains, were hit particularly hard by the hurricanes and that the residents are still working hard to recover. It’s probably safe to say that things aren’t “business as usual” for those folks.

But if you’re ready to visit Puerto Rico, there are plenty of places where they’re ready to have you!

Vic and I have both traveled to other countries, but this was the first place the kids have been where English was not the predominant language. Despite the fact that Puerto Rico is part of the United States, in many ways it felt like we were far from home (even though our home is Florida, where about 20% of the population speaks Spanish).

But in other ways, there were enough familiar sights (fast food chains, hotels, and stores) to help us from becoming too overwhelmed. At at least they drive on the right side of the road in Puerto Rico (Vic was very grateful for this, since he was the one driving our rental car all week).

Making the Most of Your Puerto Rico Vacation

After every trip, Vic and I do a little Monday morning quarterbacking. We talk about what worked, what didn’t, what we wish we’d done differently, and what we’d recommend to first time visitors. These are some of our “dos and don’ts” for visiting Puerto Rico.

Don’t bring everything but the kitchen sink. You’ll be able to get many of your essentials in Puerto Rico. And unlike other places we’ve traveled to, the prices in PR are comparable to back home. I discussed this in my post about visiting Colorado. For one-off items, like snow boots (or in the case of Puerto Rico, a cooler and beach chairs), it may be more space & cost-efficient to go shopping once you get to your destination.

We didn’t hit any thrift stores in PR, so I can’t tell you about the secondhand shopping scene. I can tell you, however, that there are Walmarts all over Puerto Rico. So you can buy some of your gear once you get there, at prices that won’t be painful if you can’t fit it into your return suitcase. Same goes for snacks. Wherever you’re staying, chances are there’ll be a Walmart nearby. Stock up on food and bottled water once you get there. 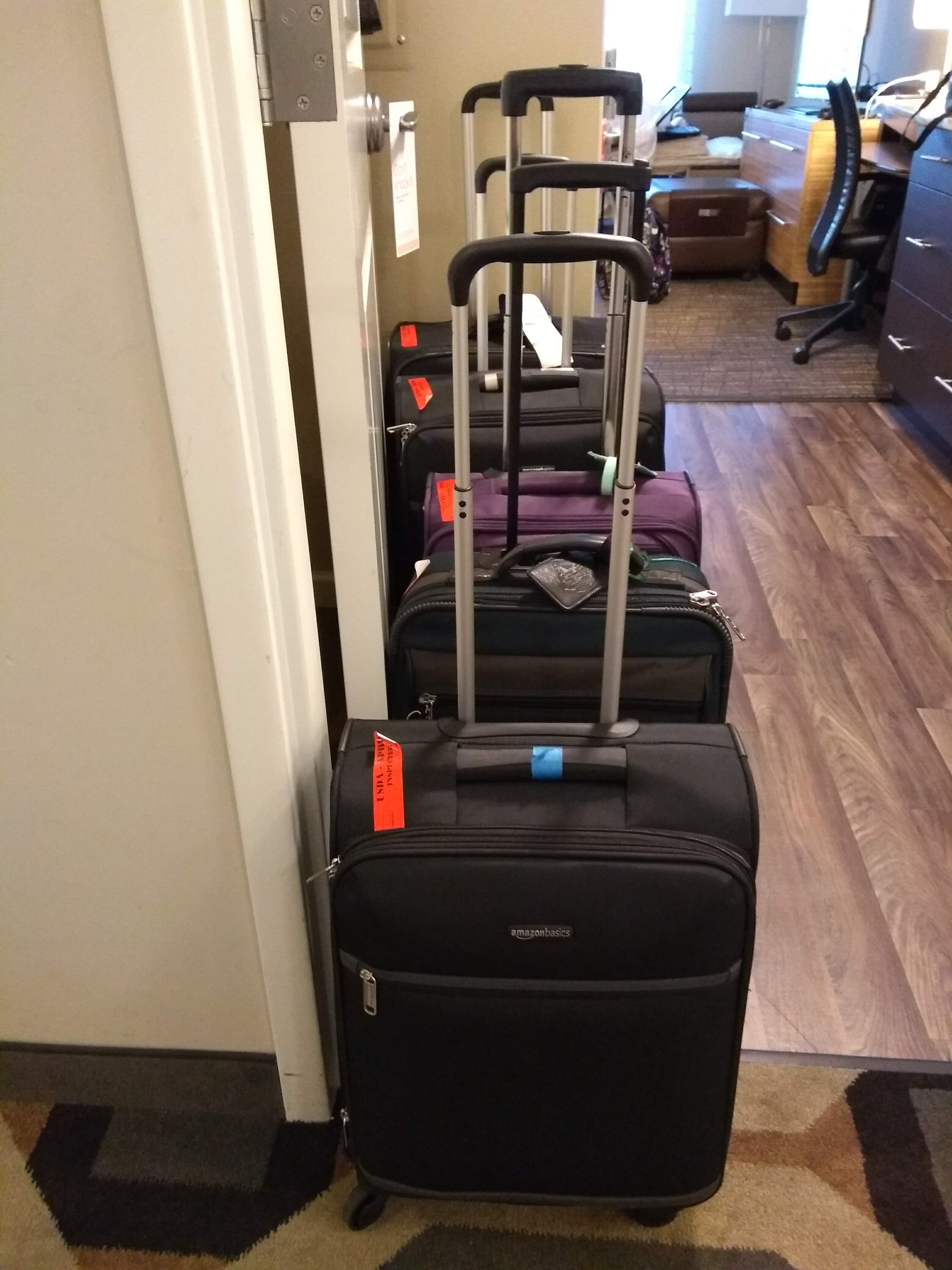 Do bring products or brands that you’re particular about. A Walmart in Puerto Rico looks basically the same as every other Walmart you’ve ever been in. But they may not carry the same brands as your local store. For example, I couldn’t find the line of hair products that the kids use or my favorite brand of moisturizer. And interestingly enough, we couldn’t find Goody’s (or BC) Headache Powders anywhere, and we checked in several stores. (I wonder if that’s a regional thing?) The lesson: if you can’t live without it, make sure you pack it.

Do pick up an extra roll of toilet paper during your Walmart trip. I know that’s a weird one, but trust me on this. Three out of four bathrooms in PR were perfectly fine, but you don’t want to get caught with your pants down (haha) if you find yourself in that unlucky 4th one. We learned this (the hard way, of course) within our first hour in Puerto Rico.

After landing in San Juan and dealing with rental car confusion, we drove straight to a supermarket for lunch and supplies. We got awesome sandwiches at the deli counter and ate at some little tables right inside the store. It was great. Before we left, we all wanted to use the restroom, which we eventually found located in a creepily unmarked room at the back of the store. The restrooms were clean, but they had no toilet paper. So we had to scrounge around the deli counter for extra napkins and split them between us. Ick.

We bought a roll of toilet paper that evening, and I carried it in my bag for the rest of the trip. It came in handy on more than one occasion. Don’t expect everyone to speak English. In my ignorance (and ethnocentrism), I assumed that many (if not most) Puerto Ricans would speak English as a second language. This was not the case at all. People who worked in tourism-based industries (hotels, national monuments, touring companies, etc.) were more likely to be fluent in English. The rest of the people we encountered – not so much. The further away we got from San Juan and the cruise port, the less likely we were to encounter English speakers.

Don’t panic if you don’t speak Spanish. Vic and I speak un poquito Español. When we combine our efforts, we speak Spanish as well as your average four-year-old. But we got by. We learned very quickly to begin every conversation with, “Do you speak English?” or “no Español.” The person with whom we were attempting to speak would then either find the best English speaker in the room to assist, or work with us until we were all able to communicate effectively. Part Spanish, part English, part charades – the thing is that everyone was so nice and friendly that we were able to make it work. Don’t automatically dismiss fast food chains as meal options. Trying new foods is one of our favorite parts of traveling. And while we’d absolutely suggest eating as much local cuisine as possible, we also don’t see it as a failure if we end up grabbing a quick lunch at KFC or Burger King. When you have kids or picky eaters or limited time (or all 3) to contend with at mealtime, sometimes it just makes sense to go with what’s familiar. Honestly, as one of our family’s pickiest eaters, I was glad to have those options readily available. This was different when I traveled to Israel, for example, where familiar chain restaurants were few and far between. I had no choice but to eat only local food, which my sensitive stomach and palate did not always appreciate.

Also, you might be pleasantly surprised. The Krispy Kreme in Ponce was out of this world. Nutella-Stuffed Donuts. Need I say more? 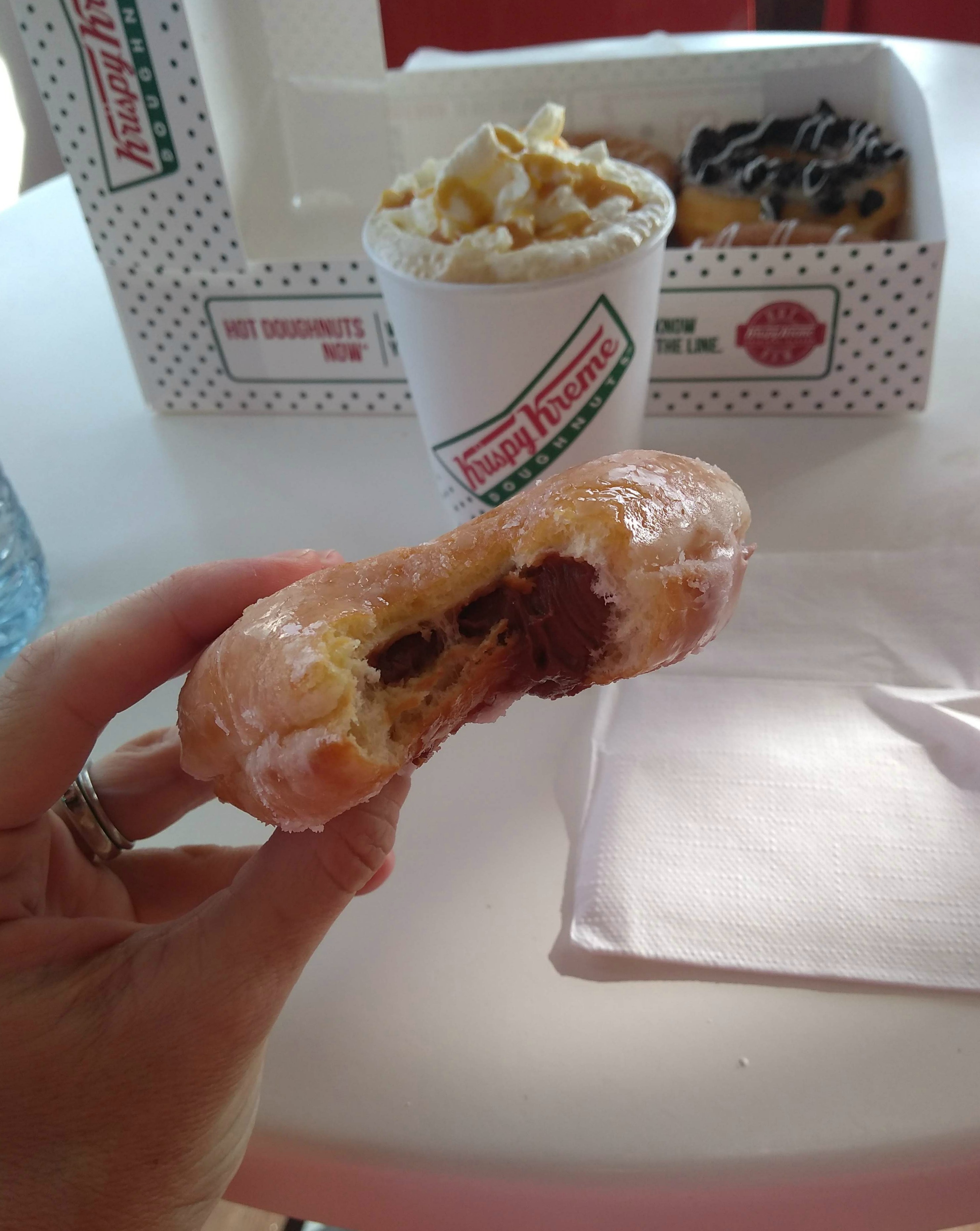 Do bring water shoes. I never wear water shoes at the beach in Florida, but I found myself really wishing I had them in Puerto Rico. Walking both in & out of the ocean seemed more treacherous than it does on my Florida beaches. The shoreline was very rocky in places, and in some spots there was glass (sea glass and broken glass) everywhere. The beaches that we visited in San Juan were relatively clean and tourist-friendly, but some popular local spots on the southern coast had lots of trash. After two full beach days, we all had cuts and bruises on the bottoms of our feet, and Vic found a bonus sea urchin spine lodged in his toe.

Also, on a purely selfish note, the sea glass in Old San Juan was a dream, but it would’ve been even more amazing if I’d been able to explore some of the rockier underwater areas.

That’s it for now. In my next post, I’ll share some of our trip highlights and recommendations to help you plan your own trip to Puerto Rico!