This is an interesting race recap to write. 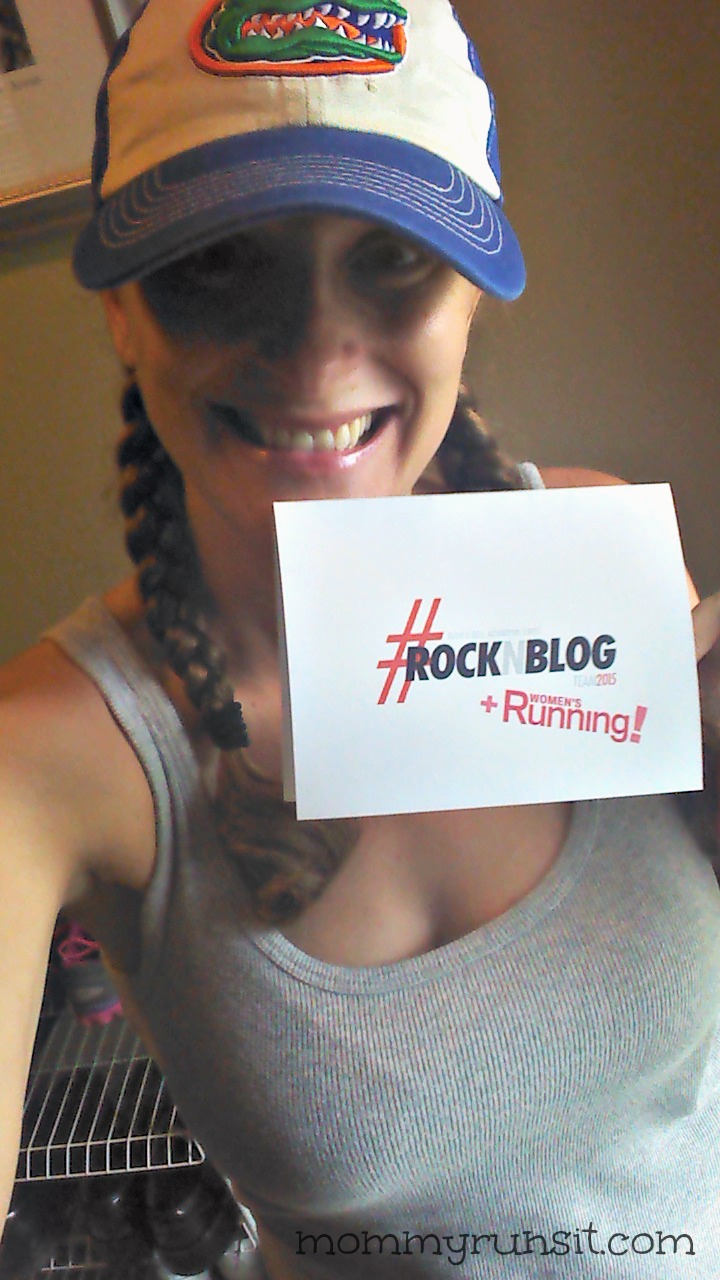 On the other hand, as much of the running community knows by now, the 2015 Rock’n’Roll Savannah event was far from perfect. There were a number of complications, many of which were related to unseasonably high temperatures and humidity. You can read about the events that occurred on 11/7/15 HERE. You can also read Rock’n’Roll’s official response to questions about race day HERE.

I love being part of Rock’n’Blog – like, really love it. This was my first ever Rock’n’Roll event, and the enthusiasm of my fellow bloggers and R’n’R friends was contagious. I went into this race expecting to have fun, and I did! But my experience in Savannah wasn’t perfect, and I need to share that with you too.

So for the sake of this post, I’m going to focus on my own personal experience in Savannah – both the good & the bad.

As you may recall, I went into this race knowing that I was severely under-trained for a half marathon. Frankly, I would’ve been perfectly happy just hanging out in the VIP tent on race day. But I’d promised my friend Ami that we’d run it together, and she’d already spent a lot of money and time making arrangements to be there. So I was running, like it or not.

On November 6, the day before the race, Rock’n’Roll sent an email cautioning race participants that it would be warm and humid on race day. Because I live in northeast Florida, just a couple of hours from Savannah, I’m accustomed to running in year-round heat and humidity. I’m also well aware that my body is sensitive to extreme temperatures and that I get overheated easily. I did my best to hydrate, and I remembered to pack my SaltStick capsules in my overnight bag.

Race participants had to pick up their packets at the Expo on Thursday or Friday. Naturally, I waited until the very last minute to do this and planned to arrive at the Expo by about 5:00 on Friday evening (it ended at 7:00). In my defense, my kids were out of school that day so going out of town required a little extra finesse (although taking them to the zoo probably wasn’t the best decision ever). Anyway, I got a late start but was still on schedule to make it to the Expo before it ended.

It was smooth sailing into Georgia, but then – BAM – traffic for miles. The Health & Fitness Expo was at the Savannah International Trade & Convention Center, which is located in an area of Savannah called Hutchinson Island. The main entry onto the island is via the Talmadge Bridge. Ami got stuck on the bridge for a long time, but luckily Waze rerouted me through South Carolina. Still, it was after 7:00 when I arrived at the Expo, and I just barely had time to grab my packet.

Ami and I grabbed dinner at Chili’s and checked into our hotel. Since we weren’t staying within walking distance of the starting line, and since I’d missed the deadline for a free parking pass at the Convention Center, we’d had to purchase a parking pass for one of the downtown garages for $10. No big deal, except that because of road closures, we had to be PARKED by 5:30 a.m. Allowing for traffic, that meant a 4:15 a.m. wake-up call. Ugh. 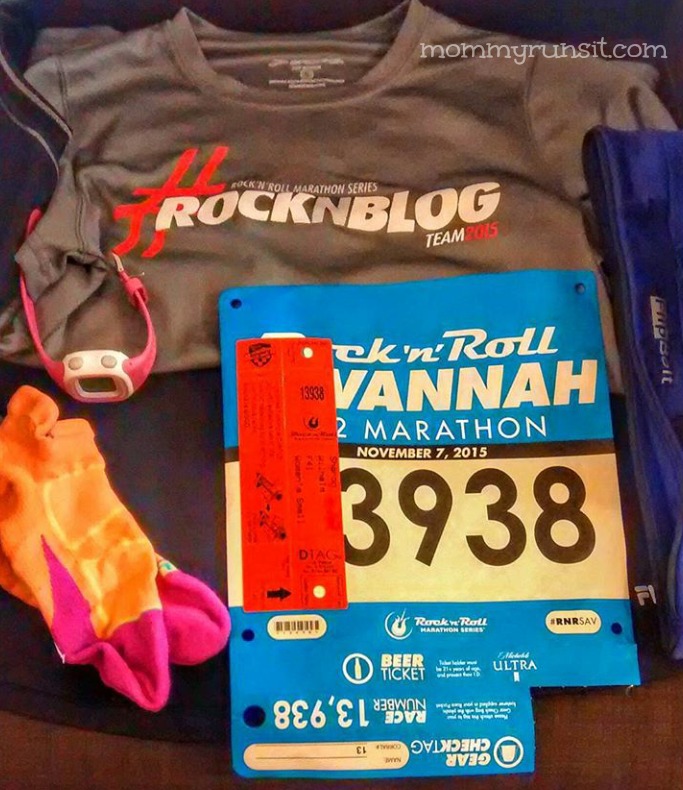 Ami and I found the parking garage and arrived with time to spare. We gathered our stuff, pinned on our bibs, and followed the crowd down to the parking garage. Our hotel didn’t have coffee out when we left, and we were both desperate for a caffeine fix. Fortunately, we came across a man with a Starbucks cup, and he pointed us toward the promised land (i.e., the Hyatt).

The Hyatt lobby was packed with runners. Ami went in search of coffee, while I stopped by the VIP lounge, which had a nice breakfast spread. I didn’t want to risk an upset stomach, so I stuck with my usual pre-run meal – a Clif Builder’s Bar and coffee. The VIP lounge was nice, but I only stopped in long enough to check my bag (private bag check was a VIP perk) and grab some coffee. Oh, and I used the private VIP restroom – it still had a line, but it was shorter than the line to the regular restroom.

Once our coffee cups were full and our bladders were empty, we headed outside to find our corral. It was packed! There were about 14,000 participants (half & full marathon combined). The energy was high and the music was loud. Apparently the race started late, but I didn’t notice – I’m never in one of the first corrals, so I’m used to waiting at the starting line. At that point it was humid but not hot. My asthma tends to worsen in humidity, so I took a couple of prophylactic puffs on my inhaler – and then we were off!

As I’ve mentioned in previous posts, Ami is faster than me even when I’m in peak race condition. We’d agreed to start out together and see how it went. I did my best to match her pace (about 10:00/mile), but I knew right away that if I kept it up, I’d exhaust and/or injure myself early on. My only goal was to finish, and I knew what I had to do to make that happen. I told her to go ahead without me.

I slowed down to about 12:00/mile, and I maintained an average pace of about 12:30/mile for the remainder of the race. Considering my lack of training + the humidity, this was a pretty good accomplishment. I reached the 5K mark at 35:28 and felt good. I was glad that I’d decided to take it easy.

Savannah is a beautiful city, but the first part of the course was not particularly scenic (and was also a bit hilly, ugh). It got prettier (and greener) as we made our way past the Savannah College of Art and Design and some of the more upscale neighborhoods. Lots of local residents came out to cheer us on, and there were plenty of volunteers at the water stops and aid stations.

Speaking of water stops – there was much post-race talk about water stops running out of water, contaminated water, volunteers dumping out water, and so on. Here’s what I can tell you based on my own observation. The water stops were very crowded – much more so than in a typical race. I saw volunteers frantically filling cups and trying to meet the demand for water, yet at times I still had to stand and wait for a cup. At least one station was completely out of Gatorade. During the last few miles of the course, I saw local residents handing out ice and allowing runners to drink from their garden hoses.

As I mentioned earlier, my body is sensitive to the heat, and I tend to get overheated rather easily. For me, the first sign of trouble is usually goosebumps all over my arms and/or legs. Sure enough, despite my extra intake of water, salt capsules, and Gatorade, the goosebumps showed up around mile 5. Normally, I’d just slow down and drink more water. But this time I decided to err on the side of caution – and around mile 6, I stopped at a first aid station. One of the medics checked my pulse (which was normal) and had me sit down with an ice pack on the back of my neck. When I felt a bit better, the medic told me that it was okay for me to proceed as long as I slowed my pace. I promised to stop again at an aid station and/or ask for help at the first sign of distress.

I grabbed my medal, gulped down a bottle of chocolate milk, and found Ami (who finished almost 40 minutes before me – good thing we split up). I was soaked with sweat and my knees were sore, but I was in better shape than I’d expected. 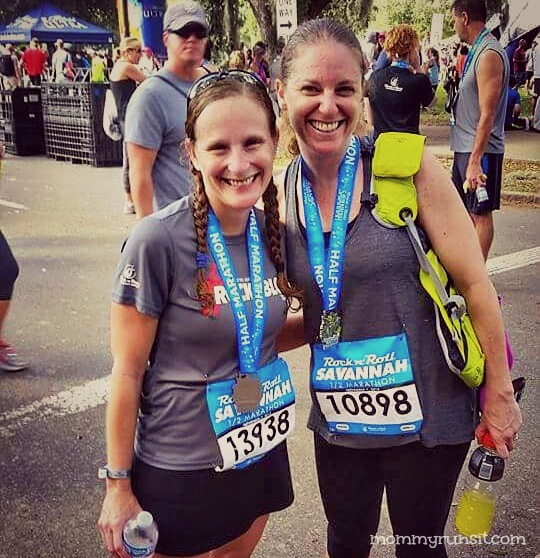 We were both hoping to shower at the hotel before our long drives home, so we didn’t stick around after the race. I did stop by the VIP tent just long enough to pick up my bag and grab some Gatorade. There was a catered buffet and a bar – it looked really nice, and I wouldn’t have minded hanging out. But to be honest, I almost always head straight home after races. Eating and drinking are the last things on my mind post-race – all I ever want to do is shower and nap.

A nap wasn’t going to happen, but we did (just barely) make it back to the hotel in time for both of us to shower. After walking about a mile to the parking garage and spending 30 minutes in traffic on our way to the hotel, I’d worked up an appetite, so we decided to grab some lunch before hitting the road.

As we waited for our food, I mentioned to Ami that I’d heard an announcement over the PA system right as I was crossing the finish line. I couldn’t quite make it out – something about diverting the runners? We Googled it – and sure enough, it turns out that at 9:45 a.m. the course was diverted due to the dangerous weather conditions (73 degrees and 99% humidity). Marathoners who had not yet split off from the half marathoners completed the 13.1-mile course. Marathoners beyond that point were diverted at mile 15 or 21 back to the finish line.

Naturally, many runners were not pleased with this decision. But as the news broke that a runner had collapsed and died on the course and that several others were taken to the hospital with heat-related injuries, it seemed clear (to me) that Rock’n’Roll made the only safe choice by shutting down the race. Did it suck? I’m sure. But I’d rather be alive and disappointed than the alternative, you know?

Rock’n’Roll Savannah 2016 and Beyond

If you’re thinking about running R’n’R Savannah in 2016, here are my suggestions:

While the extreme weather and subsequent events were a fluke, I think it’s smart to always bring your own water to a race, especially a half marathon or longer distance. I learned this the hard way a couple of years ago – I didn’t bring water and suffered through two miserable miles before finding a water station. It’s also a good idea to bring your own salt capsules and/or electrolyte replacement drinks/gels to a long distance race.

Did I miss anything? If you ran Rock’n’Roll Savannah, I’d love to hear how your experience compared to mine.