So I did a thing.

It might not be as cool as winning the Master’s, but it was a pretty big accomplishment for me – especially since it was my very first time skiing, not only since my L4-S1 spinal fusion, but EVER!

First, let me give you a couple of quick details about our ski trip. We’d been trying to plan one for the last two years, so we were really excited when the plan finally came together. The tricky part was planning an affordable trip. Since we live in Florida, we’d have to travel quite a bit north to find snow, let alone a ski resort.

We asked around, and several of our friends recommended skiing in North Carolina. This was the perfect solution because we wouldn’t have to pay for airfare (we rented a car), and ski tickets and rentals are more reasonably priced than at some of the other more popular ski spots. North Carolina had a handful of ski resorts to choose from, and based on the recommendations of friends and online reviews, we picked Cataloochee Ski Area in Maggie Valley, NC. (Their website has a lot of info for first-time skiers, which was super helpful.) 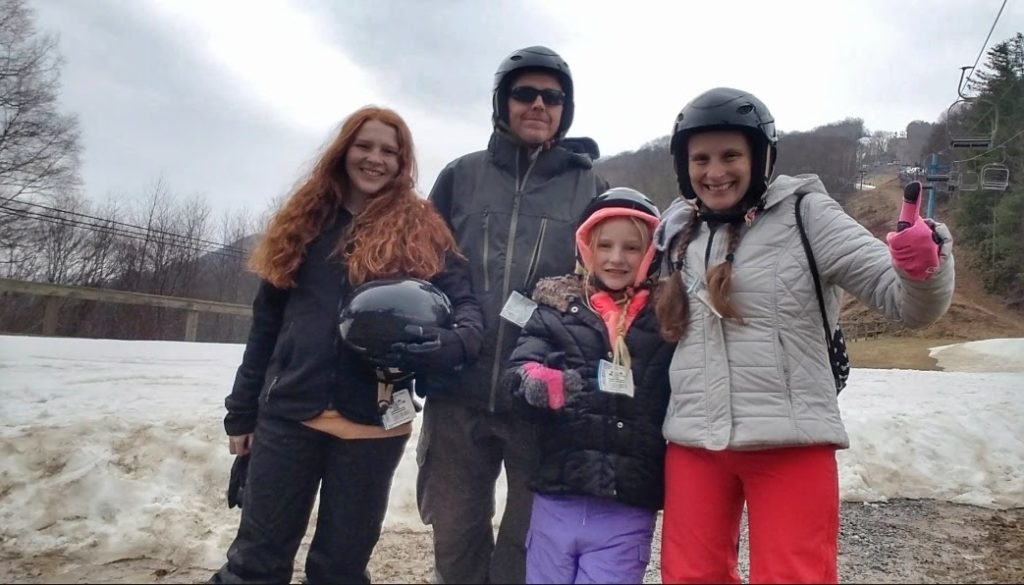 Just for comparison’s sake: an adult weekday lift ticket at Cataloochee was $43, while the same ticket would have been $99 in Breckenridge and $79 in Aspen. And Cataloochee has a “Kids Ski Free” program, so if you stay at a participating hotel or inn (which we did), you can get a free child’s lift ticket with the purchase of an adult ticket. I don’t know if ski resorts in other states have similar deals, but this was a big selling point for us, especially since we also had to pay for equipment rentals and ski lessons (not to mention warm clothes). We used credit card reward points for the hotel and car rental, so the trip turned out to be relatively affordable.

The kids’ spring break was the week of March 17, which fortunately happened to be the last official week of ski season in Maggie Valley. We knew there wasn’t likely to be real snow, but we were fine with the “fake” stuff – we’re from Florida! We wouldn’t know the difference.

Honestly, I was a little apprehensive about skiing with a lumbar fusion. When we went to Colorado Springs 2 years ago, I didn’t go tubing with the rest of the family because I was afraid of getting hurt. And when we started talking about a ski trip, I just assumed I’d sit this one out as well.

But by the time this trip came around, I was just two months shy of my 3 year spinal fusion anniversary. Aside from a few of the typical bumps in the road, my recovery has gone pretty well (so far). I’ve stayed active post-op and have done quite a few physically challenging (for me) activities: paddleboarding, kayaking, indoor rock climbing, hiking, ice skating, and more. During these activities, I think I’ve been pretty good about self regulating – things like not twisting or bending or taking unnecessary risks. I do what I can, and I really try to listen to my body and honor its limits.

So I started tossing around the idea of at least giving skiing a try.

We started out with ski lessons. I’m not going to lie – I was scared! But then I watched my kids pick up the basics almost instantly. I was inspired. So I found my courage and did it.

Frankly, I pictured myself getting tangled up in my skis almost immediately and toppling over. And yeah, I did my fair share of toppling during the week. But I also managed to stay upright and even move a little bit. With every success, I gained a little more confidence. It felt awesome.

Going into the ski trip, my biggest fear was falling. Falling is scary just in general, and it’s even scarier after a spinal fusion. And I fell. A lot. My first fall (about 1/2 hour into my lesson) was terrifying. But then I stood up and realized that the only thing I’d injured was my ego. And a bruised ego is way better than the alternative.

So here’s the thing: skiing was a risk – I know that. But I think I played it pretty safe. I stayed on the practice slopes, which only had a small incline. Vic and Sophia tried one of the beginner slopes, but I didn’t risk it. I was careful to keep my core engaged and limit my twisting, and when I fell I tried to fall “correctly.” (We were told that the snow was “slushy,” which made the impact from my falls a bit easier on my body.) When I was tired, I hung out in the lodge.

I’m happy to tell you that even with all the falls, I didn’t hurt my back! I was sore all over, of course, but I didn’t have any localized back pain. The only real injury I sustained was jamming my thumb (so painful! It’s still not fully recovered a month later). 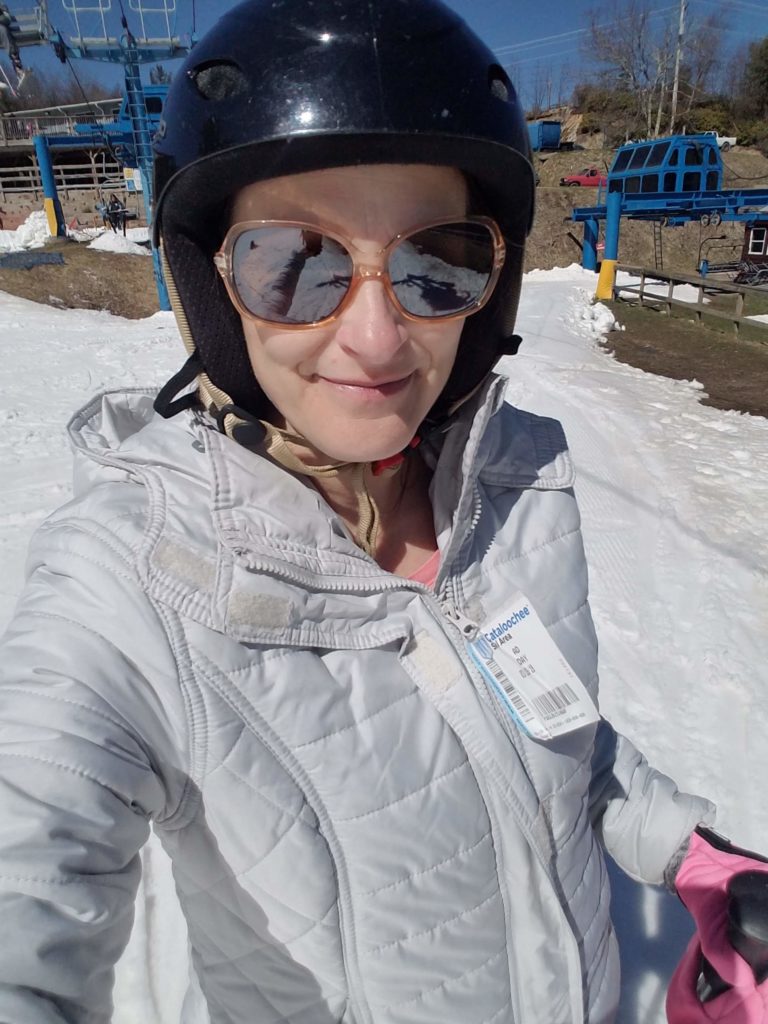 My reason for posting this is neither to encourage nor discourage you from skiing after a spinal fusion. That’s between you and your doctor. Each of us has a unique surgical and recovery experience, so what worked for me may absolutely not be right for you. (Remember: I am nearly 3 years post-op. My bones have fused, and I’ve had an uncomplicated recovery. I’m pretty healthy and was quite active before my surgery.)

I’m writing this because I want you to know that life after a spinal fusion can still be really, really good. If you are considering a fusion or are early in your recovery, just know that it gets better. Your “normal” may change, but that won’t necessarily be a bad thing. Plus, I wanted to share this accomplishment with those of you who’ve been following my journey, and who have shared yours with me!

I almost forgot to tell you the coolest part! You know how I said that it was late March and we weren’t expecting “real” snow? On our last day on the mountain it SNOWED! Like actually falling from the sky! I know that’s not a big deal to most of the world, but it’s a pretty major life event for Floridians like us, especially since it was completely unexpected. Being up in the mountains with snow falling…that’s a memory the four of us won’t soon forget.

When you’re from Florida and you learn that on top of a mountain, “precipitation” in the forecast = snow. (We were genuinely expecting rain!) . My first time skiing post-op (or ever, for that matter) was a success! I had little to no back pain, and while I did have a fair number of falls, the only thing I injured was my thumb. Falling was scary, but the snow was slushy, which made it relatively (and surprisingly) easy on my body. . As my #teamtitanium friends can attest, recovering from a spinal fusion is a long, sloooow process. At almost 3 years post-op, this was a huge milestone for me. I’m so grateful.